How to Make Dandelion Tincture 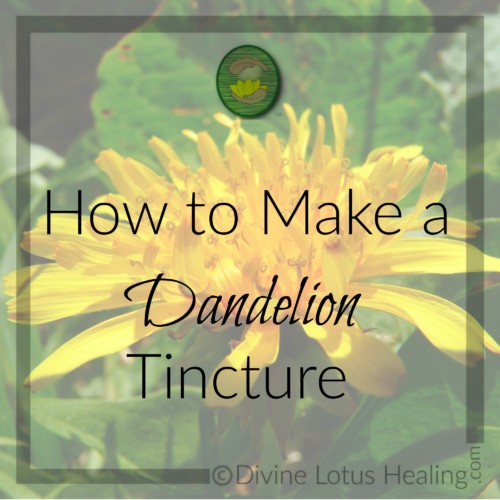 How to Make a Dandelion Tincture

I recently discovered that some dandelions had made a home in my garden bed from last year. As I prepped the bed for this year’s garden, I set aside the dandelions to make a tincture.

Dandelions have many health benefits. They are a bitter, which helps with digestion. The leaves can be eaten in salads, before they’ve flowered. Some folks say they taste too tart once they’ve flowered. One thing to note about using them, it matters what your soil contains. In the Boston metro area where I live there are high levels of lead in the soil so I would never pick the dandelions from my yard to use. The ones I am highlighting here come from my organically composted, raised garden bed which I know is safe.

Wash the soil and debris off the dandelions using cool water as soon as possible after pulling them from the earth.

Next, separate the green leaves from the roots. This will make it easier to organize everything for chopping in the next stage.

Chop the roots into small bits. Chopping them up makes it easier for the maceration process to take place. Next, chop the leaves. I rolled them together as best I could and chopped down the line. The leaves were medium and small sized so it was hard to roll them into a chiffonade. I just did the best I could! 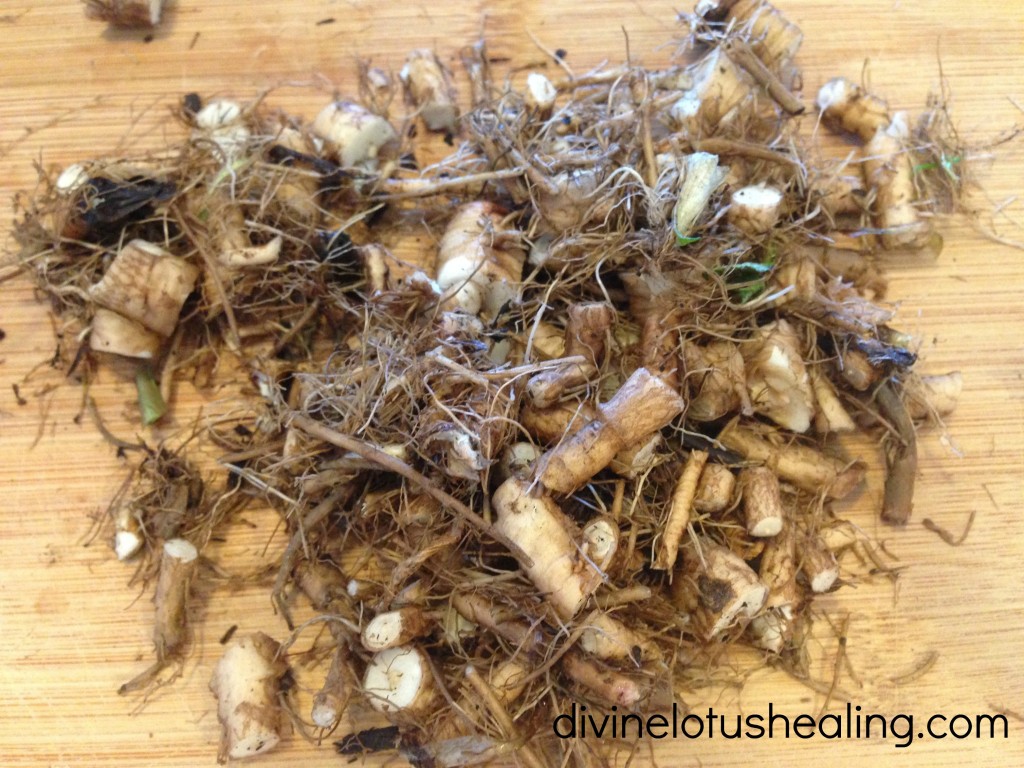 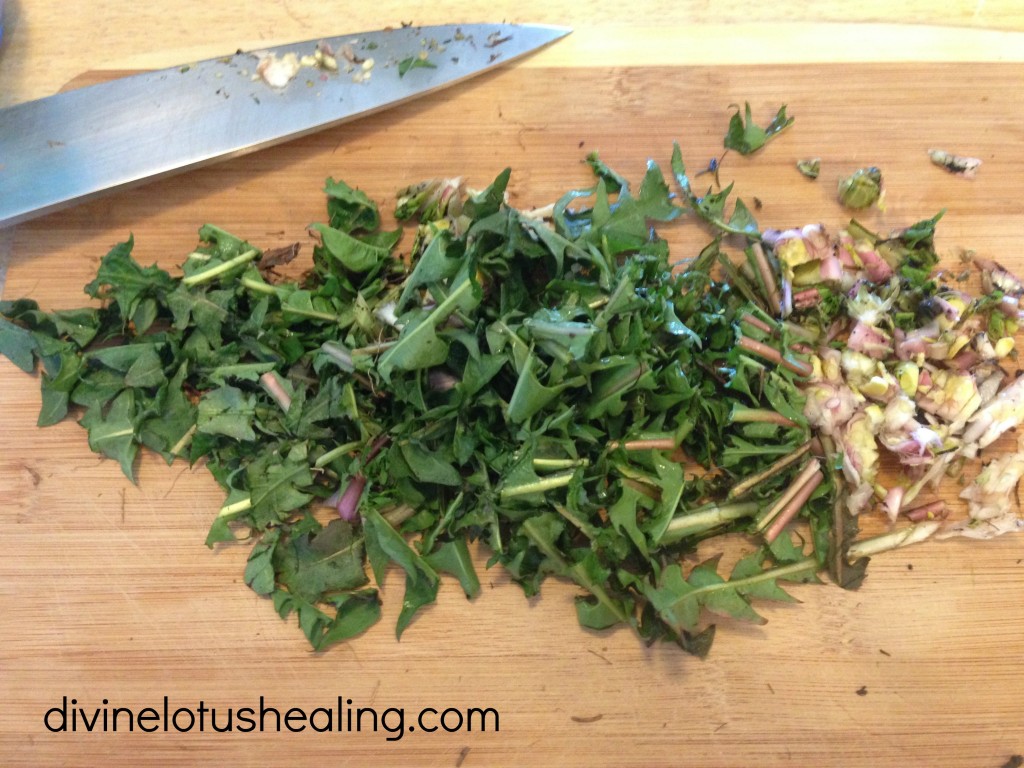 The next step in the process is to fill the mason jar with the chopped dandelion parts and vodka. Some people prefer brandy because it is a bit sweeter to offset the bitter taste of the dandelion. Or, vinegar could be used if this is being made for children or folks who do not like to ingest any amount of alcohol. I used vodka because it is what I had on hand. If you use alcohol, it needs to be between 60 and 80 proof for best maceration results. 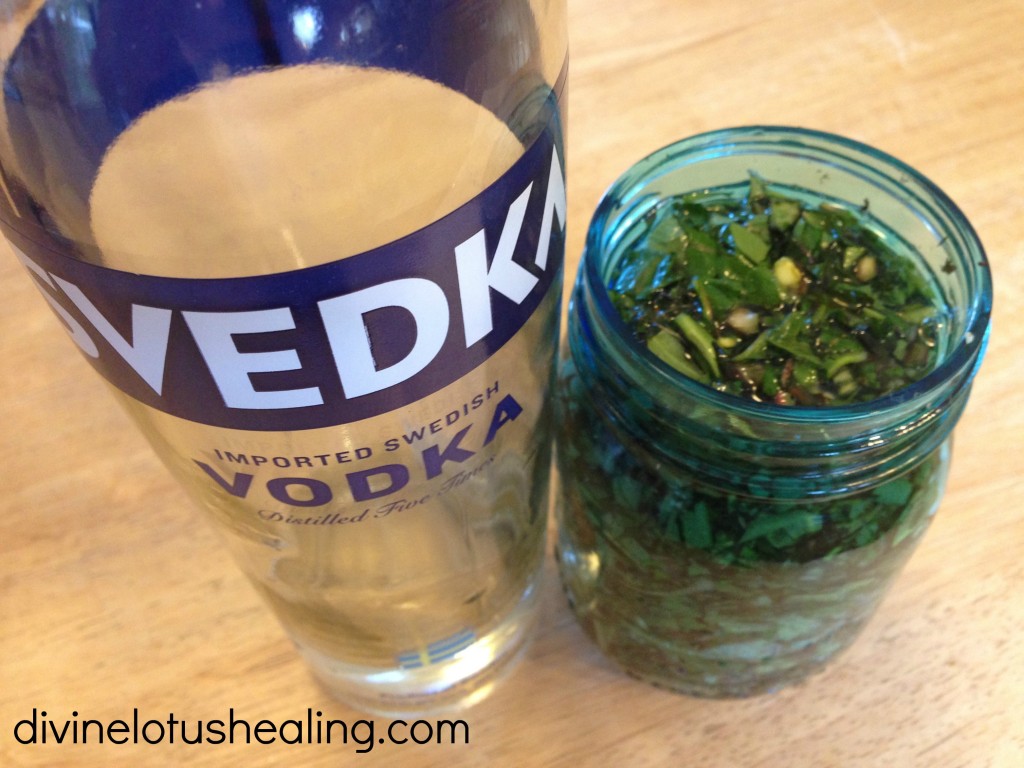 Fill the jar with the dandelion bits almost to the top, leaving about 1/4 space under the rim. Pack it in tightly. Next, pour the liquid over the bits and let it sink in. There will be lots of air pockets so gently tap the glass jar and keep filling until the liquid covers just over the top.

Next, cover the jar with a sheet of wax paper and then screw the lid on over the paper. Traditional canning jar lids are coated with chemicals that can leach into the tincture. The wax paper acts like a barrier. Next, shake the dickens (gently) out of the jar. This ensures the mixture is well coated in the liquid. Open it to check the liquid level. Add more liquid if it has absorbed into the mixture.

The final step in the preparing process is to label the jar and store it away. The label should include the name of what’s inside, the type of liquid used, the proof, the date it was made and the date it should be unpacked.

You want to let this mixture sit in a cool, dark place for about four to six weeks. I always let my tinctures sit for six weeks. The longer they sit, the more potent they are. Periodically you need to gently roll the mixture to keep the dandelion bits coated in the liquid. Some herbalists say every day, some say once or twice a week. With my busy schedule, I roll once a week! 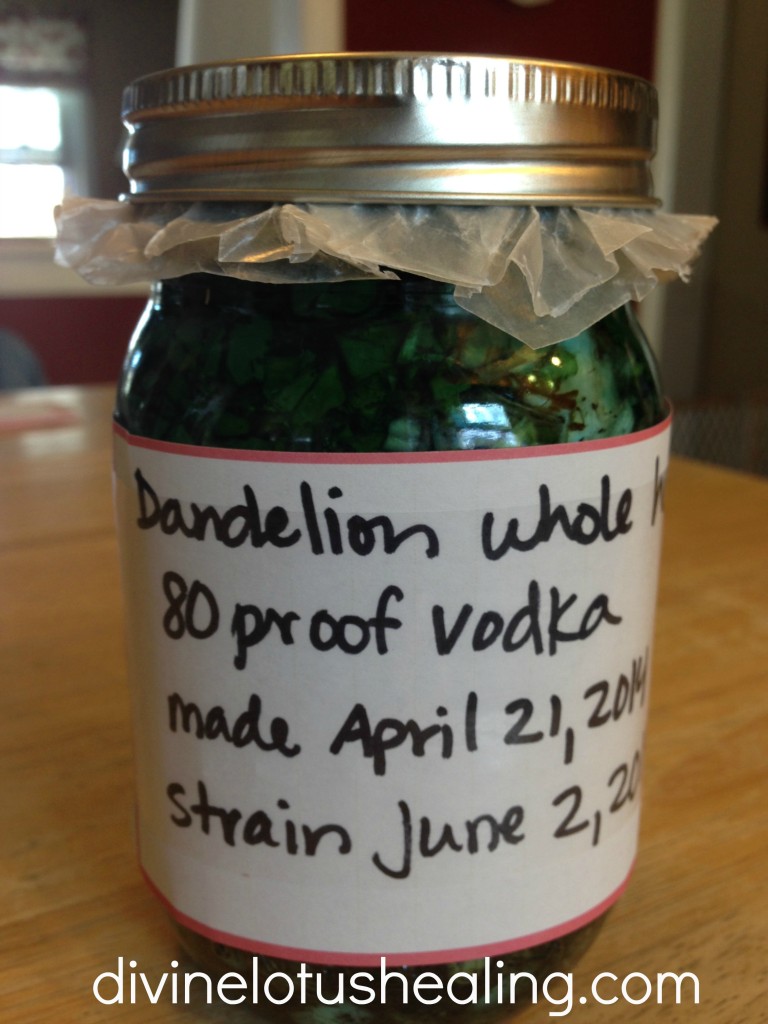 When the six weeks are up, it’s time to strain the mixture. Pour it over a strainer into a bowl. Press the herbs into the strainer to get all the remaining liquid out. It should be a dark brown color by this point. From the bowl, transfer it into a smaller tincture jar with a dropper style lid. Write a new label for it and store it with your other remedies.