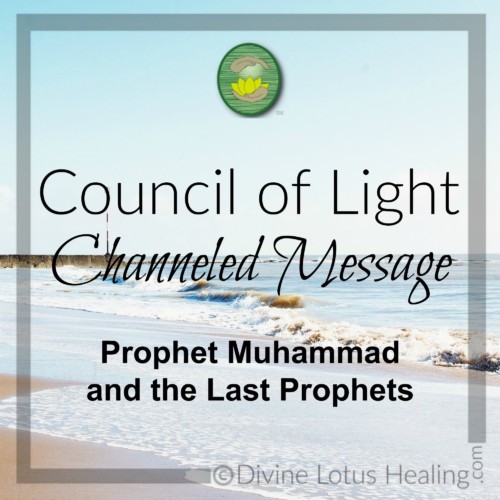 The channel session this week was precluded by three questions sent in by a reader. They are: Who is Prophet? Who is Muhammad? What is meant by Muhammad as The Seal of Prophets or The Last of the Prophets?

Good evening Laura. We are glad you are here. We wish to welcome you on this glorious evening. We see that it is very warm where you live and beautiful and we would like to acknowledge that this weather is joyous for you. We thank you for taking time to answer these questions and we are grateful for your astuteness and seriousness to the task ahead. We would like to answer them one at a time so that we may be able to give clear, concise answers, in sum.

So, to begin, Prophet is many, is all, and is some. Some people on the earth alive today consider Prophet to be one person stemming from India, or Eurasia, and working with one message. Muhammad on the other hand was a real being who walked the earth. But, we will speak about him later. So, Prophet is a term used by many in different faiths to refer to and mean one being. But, in actuality there were many beings called Prophet throughout time who spoke many inspirational words of wisdom to the human race. And, it is this distinction we wish to make because we are not referring to Prophet in this sense of Muhammad but as separate because Muhammad was a different person.

So, we cannot tell you that Prophet was a specific man, although he was many specific men throughout time. We wish to highlight that he was many and any time you read in literature “Prophet said, ‘blank, blank, blank, blah, blah, blah’…” it could be referring to many people in many places in the land at different times. Thus, we will not highlight just one. For many Prophets had, and still do have, good messages to be heard and received. And, yes, there are Prophets alive today as humans on the earth. Although, they are widely regarded as not so because typically people need to look back on their message after they have died to recognize the power and strength and righteousness of the message. We do not wish to imply that you should rush out and start following their message and become part of a secluded cultish following that has one track and one track only. For, there are many wise words to be followed from many traditions. That is the end of Prophet.

Moving on to Muhammad: He was a man who walked the earth. Just like Jesus, he had many wise things to say. He was kind and gentle and benevolent. BCE was his time. And, he spoke with utmost compassion for other humans. His message was Love and it still is. He often channels through other beings to discuss the meanings of his works that have been written down. And, although Laura has invited him here today, he is engaged elsewhere and has sent us to make his reply instead.

If you wish to read about him more and hear his words directly, you should go to the place Laura highlighted last week called the Spirit Library and find the human beings who are channeling him now.

So, we can give you a taste of what he was like while upon the earth plane. He lived in a land that was arid and dry. And, he sacrificed a lot in his life. He gave up many worldly possessions and lived a life of poverty by choice because he wanted to reach as many people as possible. And, he recognized that living in a palace with fine goods would do him no good in spreading his word because the common people of that time would not look upon him as authentic. So, he denounced his material possessions and became a “common folk person” and traveled around the region telling his followers and anyone who would listen the ways of compassion, gentleness, care for the earth and for others, and how to reach enlightenment in their own way.

He did not think of himself as a wise and great man like the rulers of the time, but only that he had wisdom to share. He knew not where this wisdom came from for it felt like it was coming into his head at some times and it was information that he did not have before speaking it. Almost like a channeling session of modern times with Laura here, for example. So he had faith and trusted that the information he was preaching was from a higher source and a divine being and that he had been chosen to share the message.

It is interesting to us as beings not of the earth plane to note that there are many human beings on the earth who use Muhammad’s words as ways to torture, maim, and kill, oppress, subjugate, and do harm to others. And, we would like to make it clear that this is NOT the way of Muhammad. He did not preach violence. He said nonviolence was the way, in his heart. And, he is saddened by the actions being taken in his name today. He understands that humans have free will and that they can choose to do whatever they want. But, he does not advocate for violence. He advocates for peace through peaceful means, not through any means possible.

There has been much literature written about him. It is available on your internet. Kalil Jabran ties nicely with his message for he is a Prophet in his own words in modern times. And, they share a common theme.

Moving on to the Seal of Muhammad and the Last Seal of the Prophets: These are just words and names for organizations and groups who claim to be connected to the being Muhammad. They did not know him personally. They can be thought of as similarly to the Order of the Knights Columbus or the Knights Templar groups that are active today. And, they worshiped his every word. They were a small faction of people. But, their message has died out because they became too militant and extreme with their interpretation of the meaning of the word of Muhammad. And, they lost favor and following in society in the East in what is today’s modern Pakistan. There is a small cult following on the rise on the internet who are trying to revive the old messages from these groups. And, we wish to say that although they mean no harm, one must be careful about whom they align with because we as a group, the Council of Light, preach, or impart, words of impartiality.

And, we wish to remind you all, dear readers, that if you are seeking information you should go to the source. Muhammad had much to say in his texts and scriptures and it is retrievable in modern times and we recommend that you retrieve that information and read it for understanding his word. There are ancient texts that have been translated from Muhammad as the direct author. These should be consulted if one wants to learn more about him and his word.

Thank you for these questions today. The energy is wonderful to work with. We would also like to point out that you (the reader who sent in the questions) are correct in saying that Muhammad and Buddha and Jesus are light and are one in the same, because in truth, all high beings of their frequency are coming from the same place in the cosmos to reach you as earth peoples. And, they all have the same message to share. They just impart it in different ways so that many can hear the same basic message which is, “Love All, Hurt None, Stay True to Thyself and Ye Shall Rise.” There are many factions and deities that deviate from this message, or add to it, in their own way. All are okay for all are helping human beings to align themselves fully to further their life goals and boost their own karma. You are all on the right path. You are all divine beings connected through one energy in the cosmos. You are all awake simply for finding our message and reading it. We wish to applaud you all and say thank you for your time.

We enjoy giving you the information we have to share and we find it amusing and informative to us when you ask questions because we have so much to share it is like finding and needled in a haystack in the dark when it comes to us sharing our message. So, by you asking questions it helps us to retrieve the information out of our database and send it forward to you through our medium of Laura.

Thank you dear ones and we wish to send you into the week ahead wrapped in a golden blanket of light for we are the Council of Light and we leave you with blessings. Adieu and goodbye for now until we “see you” again next week. Goodbye.

What are your thoughts after reading this channeled message? Please share in the comments!